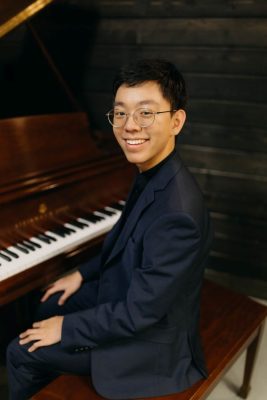 Michael Gu, the NW Division Senior Piano finalist, recently won the Senior Chopin Prize. He is a student of Dr. Rachelle McCabe. This special award is sponsored by the Chopin Foundation and is given to the MTNA Junior and Senior Piano finalists who the judges feel had the best Chopin performance at national. It comes with a $1,000.00 cash prize.

Pianist Michael Gu is 17 years old and is a graduating senior at Crescent Valley High School in Corvallis. He began his piano studies at age five with Joan Gathercoal, and for the past ten years he has studied intensively with Dr. Rachelle McCabe.

This year Michael was a national finalist in the 2022 Senior Piano Competition of the Music Teachers National Association wherein he received a special prize by the National Chopin Foundation for the best performance of a work by Chopin. In March, as the winner of Portland Youth Philharmonic’s Piano Concerto Competition, Michael performed Prokofiev’s Concerto No. 1 in Portland’s Arlene Schnitzer Concert Hall.

During the 2020-21 season, Michael was concerto soloist with the Corvallis-OSU Symphony. His solo and chamber music performances included appearances on Chamber Music Amici’s “Next Generation” concert, and Corvallis-OSU Piano International’s “Piano in the Vineyard” and “Rising Stars” concerts. He was the first-place winner of both the Oregon Symphony’s Wiscarson Concerto Competition and the Eugene Symphony’s Young Artists Concerto Competition. In previous years, Michael was a national finalist in MTNA’s Junior Piano Competition and as the winner of Oregon Mozart Players Concerto Competition, he performed Mendelssohn’s Concerto No. 1 in G minor with the OMP orchestra.

Along with his love of music, Michael has a deep interest in mathematics and computer science. Next fall he will attend the University of Washington in Seattle as a double major, enrolling in the UW’s School of Music (piano performance), and the UW’s School of Computer Science.