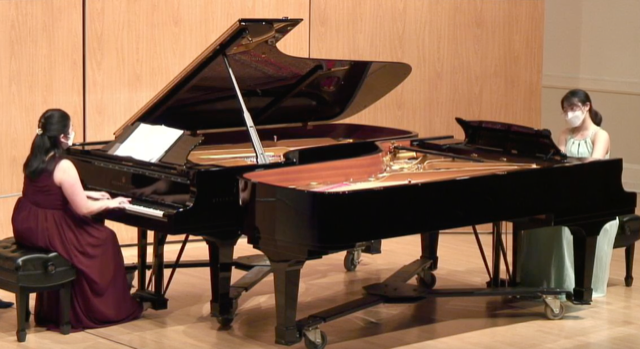 Two OMTA collegiate students placed third in the 2022 MTNA – Stecher and Horowitz Two Piano Competition. The students are Joan Tay [Singapore/New Zealand] and Dasol Um [South Korea] from the University of Oregon. Both Joan and Dasol are doctoral students of OMTA member Dr. Claire Wachter. This national- level prize comes with a cash award of $1,000.00, divided equally between the two pianists.

Joan Tay was the winner of the 2018 Oregon MTNA Young Artist Piano Competition. She was a finalist in the Yong Siew Toh Conservatory Piano Concerto Competition and performed with the Metropolitan Festival Orchestra in the 2015 Singapore National Piano and Violin Competition Final. Joan received the “Outstanding Graduate Performer in Piano” and the “Best Accompanist” awards in 2019 from the UO School of Music and Dance. She has performed in public masterclasses for Jon Kimura Parker, Natasha Paremski, Jeffrey Kahane and Anton Nel. Joan holds a Master’s degree from the University of Oregon, and a BMus(Hons) from the Yong Siew Toh Conservatory, Singapore. Past teachers include Dean Kramer, Albert Tiu and Michael Endres. She is currently a doctoral candidate in the studio of Claire Wachter and a Graduate Employee in piano pedagogy and collaborative piano.