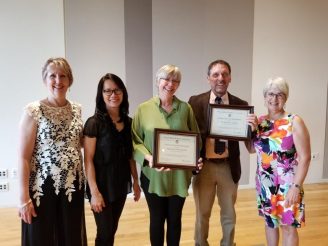 The Oregon Music Teachers Association State Honorary Life Member award brings recognition to individuals who have given extraordinary service to OMTA at both the district and state levels and who have been members of OMTA for at least 25 years.

OMTA is pleased to announce that the following recipients have been nominated and awarded Honorary Lifetime Membership by the OMTA Board of Directors in the year 2019:

Matt Cooper is a Professor Emeritus of Music at Eastern Oregon University, where he was awarded the 2019 Distinguished Teaching Faculty award, retiring after a 31 year college teaching career. He served as OMTA President from 2000 to 2002. Dr. Cooper earned his Doctor of Musical Arts degree at the University of Cincinnati College-Conservatory of Music. Dr. Cooper is in frequent demand throughout the Northwest as a performer, adjudicator, clinician and presenter, and he is known locally as the accompanist of choice for nationally-known jazz artists such as Rob Scheps, Kathy Kosins, and Dmitri Matheny.

Liz Willis holds a Bachelor of Music in Piano Performance from Pacific Lutheran University. She has been an active member of the Oregon Music Teachers Association for 34 years, serving in various positions on both the State and Portland District Boards. She has Permanent Professional Certification from the Music Teachers National Association. Liz enjoys adjudicating for the Oregon State Syllabus Program as well as the Oregon Federation of Music Clubs.